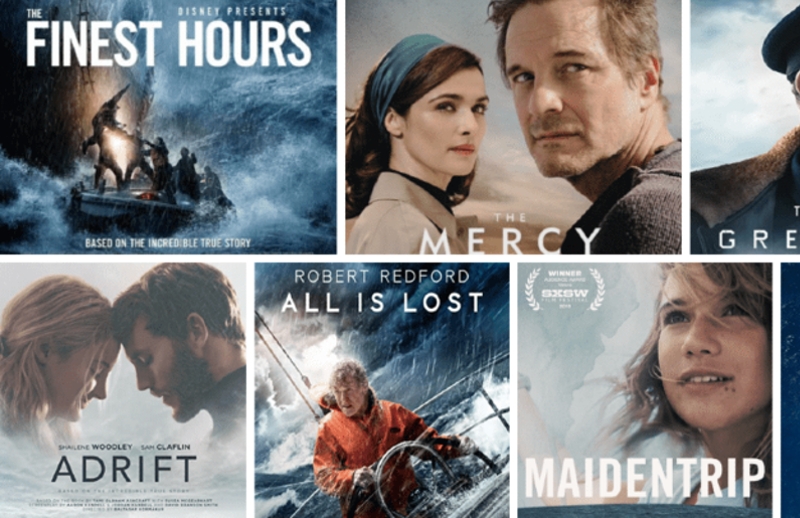 After watching and researching for a long time, we have prepared a list of the most popular sailing movies of all time. As the Maritime Goods crew, here are our ten best sailing movies. We hope you enjoy these epic adventures at sea. Enjoy watching.

Based on the novel "The Good Shepherd" by C S Foster, the film tells the story of Commander Ernest Krause during the Second World War. Commanding 37 Allied ships across the Atlantic to bring supplies to Britain, Ernest Krause and his crew chronicle the gripping story of his battle against German submarines to avoid being targeted by them without air support.
Actress; Tom Hanks, Elisabeth Shue, Stephen Graham
IMDB rating: 7.0

This movie is an adaptation of a true story full of excitement and adventure, about the largest ship salvage operation in the history of the coast guard. It tells the story of an incident on the east coast of England in 1952. A storm tore apart two oil tankers, putting their entire crew at risk. It is a film with impressive scenes of four coast guards aboard a lifeboat trying to rescue 30 sailors in adverse weather.
Actress; Chris PineCasey AffleckBen Foster
IMDB rating: 6.7

In this story, the main character, Doctor Rieke, plans a solo itinerary to go to Ascension Island in the Atlantic Ocean for his holidays. What he does not know is that he will witness the sinking of a damaged ship full of refugees. He will try to save them and for this, he will face complex situations.
Players; Susanne Wolff, Gedion Oduor Wekesa, Kelvin Mutuku Ndinda
IMDB rating: 6.5

Based on a true story, this movie tells the story of Donald Crowhurst, an amateur yachtsman who wants to participate in the Golden Globe Yacht Race. A race in which people race alone and circumnavigate the globe. Donald Crowhurst is a gripping film in which he faces many challenges on the way.
Players; Colin Firth, Eleanor Stagg, Rachel Weisz
IMDB rating: 6.0

The film chronicles the events of Operation Dynamo during the Second World War. Rescuing and evacuating the Allies from French territory is a difficult rescue operation in the French region of Dunkerque (Dunkirk), very close to England. An inspiring tale of the adventures and perils that went through during this rescue as several sailors helped rescue more than 200,000 French, British and Belgian soldiers along with their sailboats!
Players; Fionn Whitehead, Barry Keoghan, Mark Rylance
IMDB rating: 7.8

This film tells the dramatic story of Tami Oldham and Richard Sharp, a young sailing couple who fall in love soon after meeting each other and decide to sail into the Pacific Ocean on a boat to fulfill the adventure of their lives. This adventure turns into a struggle for survival when the ship is hit by a category-four hurricane. Don't miss this movie based on real events!
Players; Shailene Woodley, Sam Claflin, Jeffrey Thomas
IMDB rating: 6.6

It tells the story of 14-year-old Dutch girl Laura Dekker, who decides to fulfill her dream of embarking on a solo adventure to travel the world. The movie shows us how this young girl struggles to follow through with her plan and all the negativity she went through alone on her boat for 519 days. We recommend you not miss this trip that will challenge your horizons and dreams, accompanied by self-shots and real images.
Players; Dick DekkerKim DekkerLaura Dekker
IMDB rating: 7.5

This movie will surprise you with its Turkish name Perfect Storm! It tells the story of captain Billy Tyne, an experienced fisherman, and his crew. The adventure begins when they decide to go fishing before bad weather ruins the fishing season. What they don't know is a breathtaking movie where they are caught in the middle of one of the biggest storms in history when they step outside the allowed perimeter.
Players; George Clooney, Mark Wahlberg, John C. Reilly
IMDB rating: 6.4

This movie is the story of an experienced sailor who embarks on an adventure in the Indian Ocean. Everything was going well until one morning he realized that his ship had been hit by a missing container floating nearby. But that's not all! A few unexpected events will force him to fight to the death every minute.
Players; Robert Redford, Dyapa Gnaneshwar Reddy
IMDB rating: 6.9

This movie tells the story of Captain Richard Phillips and his crew. Kidnapped by Somali pirates while their ship was sailing in international waters, Captain Phillips faces several challenges to save his crew. This is a kind of pirate attack that has not happened to Americans for nearly 200 centuries. Based on a true event, the movie is home to some very high-tension moments.
Players; Tom Hanks, Barkhad Abdi, Barkhad Abdirahman
IMDB rating: 7.8

As Maritime Goods team, we wish you a good time.